Slice of life is one of my favorite genres. It is much maligned by some anime fans and writers, but I never manage to figure out what exactly makes them hate it so much. To me, it is in some ways, the very highest form of story telling.
March Comes In Like A Lion is a deep emotional story of growth. Perhaps it means so much to me because I had a crappy (really crappy) childhood, and I entered adulthood much like Rei Kiriyama, just surviving. Just plugging from one day to the next, knowing surely that there was no one alive in the world who cared about me and so far from feeling any form of love, that the most important form of love in the world - unconditional love  - well, I didn't even believe it was real. 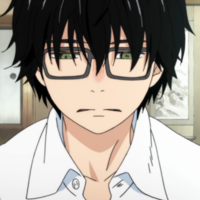 Neither does Rei. He believes that his father only loved him because Rei showed an interest in Shogi - his fathers passion - purely to get his father to acknowledge his existance. On a deep level, Rei knows that isn't love, not real unconditional love, but it's all he's got. When his father dies he is adopted by a man who also is intrigued by Rei's shogi talent, and wishes to encourage him. This isn't love either.

Rei feels driven to excel at Shogi. It is the only thing that has ever brought him the approval and praise that all children crave. As he grows older, he also comes to feel a great burden of guilt for the splintering he feels he caused in his adopted family, and Shogi becomes his way out. His way of being independent at the earliest age possible.

He doesn't love Shogi. He has no real passion for it. It's his job. He does it well. He piles more guilt on himself for being so good at something he cares nothing about, while others around him have such a deep passion and desire to play well because of their love of the game.

Basically, everything he does seeking love and happiness actually contributes to his malaise and isolation.

And then he meets this amazing family. They are close, warm, loving, and tend to bring home strays to nurse back to health. Rei becomes one of their strays. They truly care about him with that rare unconditional love because that's really what this family is all about.

Rei has no clue how to accept this love, or return it. But he is starting to learn. And grow. And feel alive and loved for himself - not just his shogi prowess.

Harunobu has declared himself both Rei's best friend, and his lifelong rival. His passion for Shogi and his competitive fire is so powerful that he will drive himself to the brink of physical destruction. And yet he is not as talented a player as Rei. He never gives up, he keeps driving, and he does it with a goodness of heart that Rei cannot understand - but he's learning.

There's more. March Comes In Like A Lion is a complex, many layered story.

And that is why we tell stories. So we can learn.