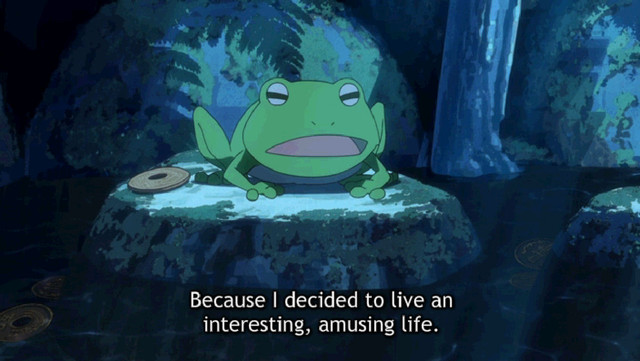 Way back in November, while plugging through Nanowrimo, I signed myself up for 12 Days of Anime in December. I thought it would be a great way to keep myself motivated and writing.

Little did I know that we would decide to get up and move 700+ miles across the desert Southwest of the U.S. in the first week of December. Impulsive as it sounds, it was actually the result of a long-standing discussion. All we did was move up the date by about three months.

While still in the process of finding our way around our new home city, looking for a residence and all that jazz, sometimes with little Internet or rather intermittent service, I started seeing the notices in my email for a few blogs I happen to subscribe to and their first 12 days of Anime articles.

Oh shit. And I don’t have time to write anything reasoned and intelligent today. What did I think I would say anyway? What on earth can I bring to the table with these amazing knowledgeable writers and anime experts anyway?

But Appropriant nudged me awake. So, here I am – better late than never.

Which is something I can write about. I came to anime very late in life, and yet I have to admit, I’m hooked. Because I did not grow up watching magic girls or boys in robots and space ships every day, much of what other fans take for granted is new and fresh in my eyes.

How late in life? I was in my fifties before I really began watching anime seriously. I had been introduced by some friends to some of the Ghibli movies, and by my lovely stepdaughter to Fruits Basket some years before. They were interesting, and pretty – I am an artist – but I didn’t really pursue it at the time.

Only years later, surfing around the Internet for something new one night, I stumbled on free anime to watch. So I watched some. And I watched some more. And now I pretty much watch an hour to four or five hours of anime every single night of the week.

Watching a different translation of Natsume Youjin Chou than the one I own I noticed that some lines were translated somewhat differently. I was curious as to why – and now I’ve been studying Japanese for three years. A couple of years ago my Nanowrimo novel was “A Tanuki, a Kitsune, and a Coyote Walk Into A Bar”.  I am forever noticing anime themes showing up in other TV shows and movies and even books. I wonder if the authors even realize it.

I peeked over my husband’s shoulder to see what he was watching earlier tonight, and discovered it was an episode of Firefly – the Sci-Fi series from Josh Whedon. It happened to be one that revolved largely around River and her brother Tam. I thought immediately how common a theme it is in anime – the big brother who is so protective and loving of the little sister, who is so dependent on him. (Maybe I’ll have to write one article about that for the 12 days of Anime).

I think it’s fair to say that anime has come to occupy a very important space in my life and my mental meanderings. So maybe other anime fans will be interested. Maybe I’ll inspire other people my age to have a look at anime rather than dismissing it as something only the younger generations enjoy.

Better late than never. To join the 12 days of Anime. And to join the ranks of those who call themselves anime fans.