Tachnology is so great - NOT 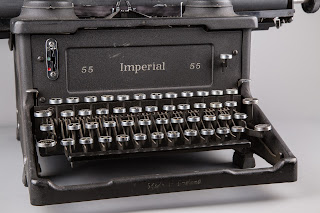 2016 was not a good year for us. Hubby was in and out of the hospital all year, and since that wasn't enough for the Universe, it seems like every single thing we owned broke or wore out from the car to the microwave (neither of which we have been able to replace - yet)

That includes my desktop computer, the external hard drive, two tablets...you get the picture. Bless them, the in-laws gifted me a used computer. BUT -  I had a ton of writing on those computers and the hard drive and all of that is now gone - inaccessible. I don't even have a copy of most of my own kindle books! But worse is losing the WIP, many with a ton of research behind them.

Technology - wonderful - when it works.

So I have been threatening to go back to pen and paper. That's mostly a joking threat, because the arthritis in my hands won't allow me to write for long. I prefer to "save" my hands for drawing and origami.

A couple of days ago, I brought up with my husband the idea of buying a manual typewriter. Something simple that doesn't need electricity and that makes little marks on paper that can then be safely stored somewhere.

Now, this is the man who dragged me kicking and screaming into the computer age in 1999 - when he flat refused to pay $50 to fix my IBM Selectric because we had a perfectly good laptop and printer. I expected considerable resistance.

To my surprise, he agreed that it might be a good idea, and even went Internet surfing to find me a manual typewriter. It looks like about $50 will be enough for a decent manual typewriter. First drafts, at least, will be typed hard copy and then I will transcribe it into the computer - and put the hard copy safely away somewhere. So if the electronics croak - I'll still have a hard copy.

$50 is a lot of money for us, but depending on some other medical costs coming up, we might be able to manage it in October.

Although if I sign up a few more Patrons by then...hint, hint, hint.

In great news I ran onto an old flash drive and it seems to have a number of manuscripts saved on it for editing. I think - I THINK - it has the full first draft of A Tanuki, A Kitsune, and a Coyote Walk into a bar. At the very least I won't have to start over. *doing another little happy dance*

Progress is being made...