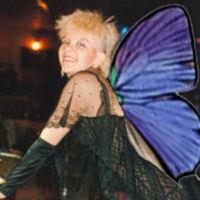 Back when I was a talented, sexy exotic dancer I had a certain move I made where I did a back bend, lowered myself to the stage and then sat up on my knees.  I often danced with my eyes closed, especially if it was a song I loved on a stage I was familiar with.

In a crowded, beautiful gentleman's club I was dancing to Turn The Page by Bob Seger. The stage was huge and featured a staircase at one end down to a smaller stage.  I had oozed my way down to the small stage and was dancing with my eyes closed,and as I sat up I opened my eyes - to see a literal, actual shower of dollar bills falling from the sky over me.

It was an unforgettable moment.  Even people in the crowd were oohing and ahhing as dollar bills floated down.  When I was totally upright I saw one of our regular customers with a big grin on his face. I know I looked completely dazzled - because I was. His eyes twinkled, and then he retreated to his usual spot by the bar.

Because there was other money on the stage as I finished my set and collected all of the bills, I don't really know how much cash he gathered into his hands and threw in the air over my head but it was quite a bit. When I was ready I went back out into the crowd and found him.  I had to say thank you for that marvelous display!  It was especially surprising because, although he had always been kind to me, and a regular tipper of small amounts, he never said or did anything to make me think he had any special appreciation towards me.

When I tracked him down, he was still smiling - and so was I.  Turned out he had won a substantial amount of money that day - and had always wanted to do that to me someday.  IN his very low key way, he had always appreciated that I had a particular love and talent for dancing and had wanted to show me that he liked my style - and the opportunity came.

So many meditations say imagine being in a shower of money, or money just pouring out of the sky onto you.  I have the great good fortune to actually know exactly what that feels and looks like, and I always look back on the moment with the same sense of wonder.