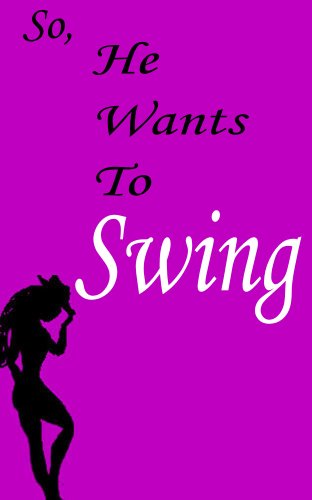 So He Wants to Swing - How to answer your partner when he wants you to swing.

I have never really understood why this little how to sex and relationship book has not taken off. I expected it to at least putter along with a regular amount of sales, like How To Eat Pussy has for a number of years.

Speaking from my own experience, I would really have liked to have this reference back when my first husband told me he wanted to swing, or to have an "open marriage".

Maybe the big problem is that we don't call people who have sex outside of marriage, or their main relationship, swingers any more, do we? Mostly I see them called "polyamorous". But in my humble opinion, that isn't strictly accurate. Polyamorous, at least to my mind implies more of a relationship status - that is, having two or more lovers with whom you have a real relationship as opposed to people you basically only meet up with for sex and little else.

Now that I've said that, looking back the majority of people I have had a swing or polyamorous relationship with have been people I had more in common with than sex.  Sometimes we did meet originally for sex, but developed a relationship over time that was much more of a friendship with benefits.

I have been bisexual and poly as far back as I can remember.  I kid you not, I had two crushes in sixth grade - one on a boy, one on a girl.  Then they became a couple.  I had some rather sexually sophisticated fantasies by the age of 11. Evil grin. Anyway, I've always been attracted more to a personality I like than to any physical characteristic, including sex organs or visible gender. So I suppose I am most likely to fuck my friends.  (A dear friend, and sex partner, many years ago came back with "Of course you fuck your friends.  You wouldn't want to fuck your enemies.")

That doesn't mean I haven't had my share of one night stands, both when I was and was not married or in a committed relationship.  After I divorced the first husband, every one who became involved with me got "the lecture".

I have all the morals of an alley cat.  I will not even attempt to be faithful sexually, although I am very loyal emotionally. Those standards will apply to you as well.  I don't care who you fuck, as long as you know who you love. The one thing I demand is honesty.  There is no need to fuck around behind my back because I don't care if you fuck someone else.  I do care if you lie to me. So just don't lie about it.  Better yet, bring them home and share!


There, I just gave away the most important point in the little book - HONESTY.  It is the one essential thing that makes an open relationship work.

And since I have now been married for 27 years to the same awesome guy, and most of those years our marriage was open (we closed it for a few years by mutual agreement - and then made it open again later) I think I can claim I know how to have a successful, long term, open (or polyamorous if you prefer) relationship.

For the next five days or so, So He Wants to Swing - how to answer your partner when he wants you to swing will be free on the Amazon Kindle.  It actually has a decent ranking on several lists but maybe it will garner an actual review, or wiggle up far enough to be noticed and sell a few copies for the next few months. I may also raise the price.  It is quite understandable, given the quality of many of the 99 cent Kindle books, that no one will buy it at that price because they assume it is barely readable, written by a total illiterate.  I think maybe a lot of people assume any one who was an exotic dancer is by definition an illiterate.

I was an exotic dancer for 15 years - what do you think?  Can I read and write? Actually you would be surprised.  Okay, you can be a total idiot and be a dancer, but you can make a lot more money, and do more with that money, if you have a brain and use it. You might also be surprised to learn that a lot of exotic dancers have advanced degrees.  More than one woman has started dancing to pay for college, gotten her degree, and then found out she makes 3 to 10 times more money dancing part time as she can kissing ass and struggling at a full time job using her degree. Having a brain - she chooses to continue dancing.

Yeah, I know, I should write about all that someday.  I will.  So many creations trying to get out of my brain, only so many hours in the day.

Below are the links to the little sex how to book about polyamory, or swinging, or open marriage, whatever you want to call it for most of the countries who buy my books.

So He Wants to Swing - How to answer your partner when he wants you to swing - U.S.A.

So He Wants to Swing - How to answer your partner when he wants you to swing - U.K.