It's officially a garden!

One of the lovely things about this new lot we moved into a few months ago is that I have a little tiny green space - complete with white picket fence - that I can tend. 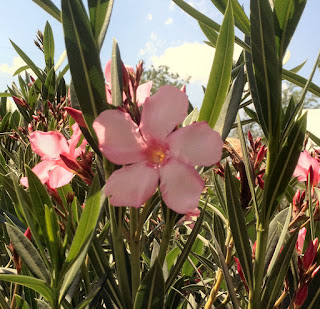 <<<These pretties were left behind - but have been responding with lots of flowers now that they are getting some TLC.  Azaleas and cacti.

Almost as soon as we moved in I put in some more fun flowers - morning glories, a couple of varieties of sunflowers, moon flowers, and a wildflower mix I barely raked into the hard soil of a big bare place under a big tree.  Watering caused a lot of volunteers to spring up - dandelions, to my delight.  Among others I am less delighted about. 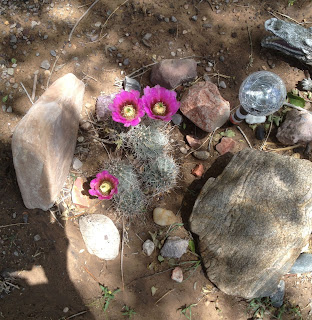 There is a variety of what I've learned are called Damned Yellow Complex wildflowers.  (Kinda like Little Brown Job birds) It gets about four feet high if you leave it alone, and makes pretty yellow flowers, and then huge seed heads, which have been visited by Lesser Goldfinchs!  I hear butterflies like them, too, so I am inclined to let them do as they will.  I did have to chop one down that was by the water hookup though.

I discovered a couple of days ago that what I thought was clover was actually buffalo burrs!  So they got yanked up toot suite.

But today's big effort was dragging out the kiddie pool.  Which magically made the kiddie next door spring outside again to point and inform me it was a pool.  No, I told him, it's a garden.  And then I proceeded to poke holes in the bottom and fill it with mulch, top soil, cow manure, raised bed garden soil, and more mulch.  Grandpa took the boy away to lunch - I hope the kid can cope.

So far, I also have patio tomatoes, Sweet 100 Cherry tomatoes (my favorites!), jalapeno peppers, and New Mexico Big Jim peppers (how could I resist?  Especially since James requested a poblano type pepper for cooking), and a few Spaghetti Squash.  A little clutch of African giant marigolds are watching over the veggies.  They are from Walmart - but they all look pretty healthy.

Still to come - we have a place down the road that said they were going to get in our Thai peppers.  Got to get down and check them out next week.  And I'll take either healthy little seedlings or seeds for some zucchini and summer squash, dill and cilantro.  Maybe cucumbers if I feel there is enough room and time for them to grow. And I'd like a few more marigolds.

I've set the hubby to keep track of whether or not he thinks the $75 or so spent on the garden comes back OUT of the garden in food. (Of course, next year we will put considerably less in and hopefully get more out)

So that's my day.  Really, I did this for record keeping.  We'll see how they go this year, I'll post now and then, and have a reference for next year.  New place.  New garden.  New seasons and such I suppose.

Speaking of which, its the 3rd quarter in Scorpio if you're keeping track.