Mystical Nature Books for Children 10 years old and up 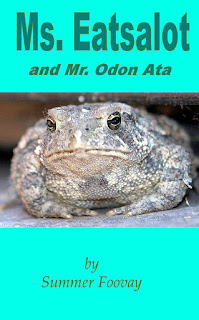 I am proud to say that I have finally finished Book Three of the Odon Ata series for children 10 years old and up.  Over a year ago I stalled out trying to decide what animal Mr. Ata should claim to have been next and where the story arc goes from Book Two.  I had to shove some mental blocks out of the way and deal with some major real life issues before the next step in the story became clear.

In 2017 I hit the ground running, publishing my book on Peritoneal Dialysis for Laymen, and following it closely with Book Three of the Odon Ata series for children, Mrs. Eatsalot and Mr. Odon Ata.  I also have two short Works In Progress in process, built with the essays written for my old websites, I am Pagan, and Pearlie the Psychic Kitty.  They should be out soon, followed shortly by Book Four of the Mr. Odon Ata series!  Believe it or not, I actually have a plot and events for Book Four already - but knowing me, things could change so I'm not telling yet!

One of the things that makes me so proud of this series is that Book One, Blue Dragonfly and Mr. Odon Ata  has three, yes THREE five star reviews.  In fact, every review of it is a five star review.  I think I know who one of the reviewers is, the other two are total strangers to me.  I never did the trade a review thing, or free books, or buy a review on Fiverr.  I don't have a hot shot publisher or publicist getting reviews for me - so these are three honest five star reviews.  On one book, the second children's book I've ever written.

The first children's book I wrote, The Fox and the Rabbit has only one review - but again, five stars.

Because I put everything up for free in November, as I usually do during Nanowrimo, none of these are currently eligible for a five days of freebie deal.  When they are, I'll put them up and certainly let you know!

The Odon Ata series was formerly named the Blue Dragonfly series, however I discovered there was a children's publisher of that name and I did not want to cause confusion.

Right now I'm just thrilled I have an actual trilogy!

Ms.Eatsalot introduces a new character, Mrs. Brown.  She is a senior citizen who has traveled the world and collected a postcard from every place and event she's seen.  Her home is wallpapered in those postcards!  While Tom is helping Mrs. Brown out around the yard and garden he is introduced to an immense toad that Mrs. Brown calls Ms. Eatsalot.  I wonder if Mr. Odon Ata has ever been a toad?  Hmmm...