Nanowrimo2016 Shaxpir and all that jazz 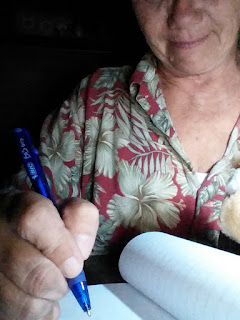 I am, I am, I am still writing on Nanowrimo 2016 novel, now temtatively titled (on my Shaxpir) Ming, the Kinky Tailed Cat.  To tell the truth, I can't tell you EXACTLY how many words are in the novel because it's partially in Shaxpir, partially on my Google Drive, and partially handwritten in the notebook you see me holding down there.  But I will admit I am well behind the goal, no matter how you count words.  At this point I have to admit I am fairly sure it isn't going to hit 50K or be finished by the end of November.  It will no doubt be set aside with the million other WIP, which is where it came out of anyway.  December I want to jump into the rewrite of the third book of the Blue Dragonfly series, as well as finishing up Serendipity on Wattpad, and the first draft edit on Nanowrimo 2014 (A Coyote, A Kitsune, and a Tanuki) and a few other projects I'd like to finish and publish, either on Kindle or Wattpad. 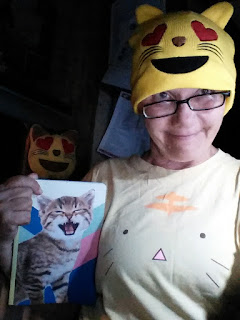 And in case that wasn't enough to keep me busy, I have started a winter project.  In case you don't know me that well, some years ago I started choosing some project or other - something new I want to learn - to engage my brain over the cold, closed in winter months.  This year with all the transition going on, I had decided I wanted to simply work on improving previous projects - learning Japanese, and practicing some more advanced Origami.  I was tossing around another idea or two, though, of course.  Then I ran onto an opportunity to learn Reiki at a price I could afford.  With high hopes that I will be able to improve the husbands health, and at least reduce some of his pain (since we cannot afford to get pain medication for his arthritis) I purchased the course and have started on it.  I am really glad that I did, because I think it is making significant improvements in my inner life, at the very least, and therefore probably in everyone's outer life around here.  Hubby says, if Mama ain't happy, ain't nobody happy.

Oh yeah, I meant to also mention that I downloaded and have been using Shaxpir on my Nanowrimo novel.  I have fallen in love with it, because it lets me write the way I write, especially on WIP.  I can jump in, write a scene, or make a quick note of an idea, without any hassle or having it take longer to wrestle the software than to jot the idea in a notebook.  Speaking of notebooks (and I have about six right now with notes in them) Shaxpir lets you create a notebook for each novel with jottings of idea, info, websites, whatever.  Again, really works with my dart here, dart there, style of research and thinking.  This software simply suits me perfectly.  In December I plan to sit down and put the current WIPs into it, to finish, rewrite, and edit.  And then the ones after that, and the ones after that.  I think after many years, and many notebooks and softwares I've found the one for me.  I haven't gone to the website or browsed the forums or any of the rest of it.  Haven't tried the conversion to ebook function yet.  But as far as it goes, this is my review so far and I do recommend Shaxpir if you've got a pinball machine for a brain like I do.

It's time for us to get our shit together, disconnect the RV, and take him over to the dialysis clinic.  These photos of me in the dark - that's me working while he is having dialysis.  I have this little wonder LED light I charge all day so I can see to work in the RV after dark.  The hubby sat down and did some work on the Chromebook today so MAYBE it will concede to not only let me write, but will actually SAVE my writing (so far it's simply eaten 5 or 6000 words because it gets pouty when it doesn't have Internet).  And if it goes haywire or runs out of charge - I have my trusty little kitty notebook and some pretty pens.  Ain't nuthin gonna stop me.