#Nanowrimo - I changed my mind 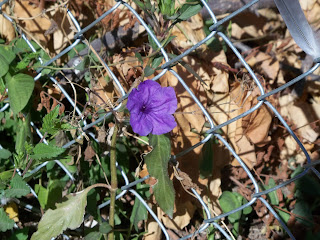 I love morning glories.  They are one of my all time favorite flowers.  I found this beauty growing bravely out of a pile of discarded tree trimmings down the alley from my home.  It reminded me that even when things seem dead and destroyed - there is beauty and hope.

A reminder I really needed this year.

With that said - the top news is the husband has had several good dialysis treatments.  His blood pressure is staying up and the fistula is working well.  We've knocked out most of the follow up doctors appointments and (knock on wood) he has managed to stay out of the hospital for 30 days in a row so far.  I'm shooting for one whole calendar month with no hospital days now.

Did you wonder what happened to the #PoweredbyIndie campaign?  I got to wondering if it was doing me any good to use the hashtag and make little posts at Facebook and Twitter, so I went to look at my book sales.  Hot diggity!  A spike!  I dug down to find out which book has been selling.  It's this one:


How to Eat Pussy by Petit Morte

Something with no mention, no advertising, and under my pen name at that!  So after I picked myself up off the floor from laughing I quit bothering with that particular little campaign.

But another part of the decision was this.  Moving from the old computer to the new(er) one brought home again how many works in progress I have floating around here - from a single line with a bright idea saved in notepad, to 30,000 words or more lacking a proper ending or in need of editing.  (I hate to edit) Do I really want yet another new WIP plopped onto the computer to stew for five or six years or more?

So I've decided to grab one of those WIP - one that is little more than bits and snatches of ideas, dialogue, good intentions and in one or two cases something resembling a plot - and make it my Nanowrimo novel.  As much as I've read about people who are working up plots, doing up character sketches and other small prep tasks for Nanowrimo novels, I figure this clearly doesn't count as using a prior novel and believe me, I have plenty of WIP that are little more than that.

In fact, I have a big loose leaf notebook with four WIP done largely in long hand during last winter when for a time I did not have a working computer available.  So I am leaning towards one of those or...here's a biggie...the next book in the Hunters of Men series, which exists almost entirely in my head at this point.  I've had a couple stabs at it and get depressed and quit.  It's a big job.  But maybe if I can tempt a Nano friend or two into word sprints I'll get it well started enough to force myself through.

Meanwhile, I'm trying to finish up Serendipity over at Wattpad.  It has about two chapters to go.  I have to admit though, I'm enjoying it and can see how it could easily go on and on and...  so maybe it will.  And I think I finally have solved the doldrums the third book of the Blue Dragonfly series is in.  At last, a plot!  I've got a week to rewrite and finish that baby and then I hope to publish and maybe even spring for some advertising.  The first book in the series has five unsolicited five star ratings - surely that counts for something?  Maybe it will give me a chance against people with more money to spend to buy reviews and awards and publicity?  I can but hope.  (Looks up at the morning glory...)