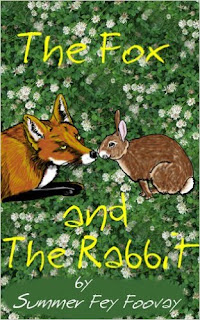 I have written a few books for children; The Fox and the Rabbit, Blue Dragonfly, and The Weaver.  The Fox and the Rabbit was my first attempt at an illustrated book for children.  Blue Dragonfly and The Weaver were the first two parts of what was meant to be a lengthy series blending folklore, mysticism, fantasy and perfectly correct factual information.

There are several more in that series sitting around waiting to be finished on my harddrive, as well as several books meant to be illustrated fact books like the million others you see for the Fire - you know - 12 Most Beautiful Horses, 12 Interesting Facts About (fill in the blank).  Most of those use public domain or licensed photos, I was going to illustrate mine with my own artwork, which takes quite a bit longer.

Looking back I notice that 2015 is the first year in five years I have not published one single book.  Not even a short story, or a children's book.  There are a lot of reasons for that - it was a pretty tough year for us one way and another.  Even the good things, like Firefly, took some adjusting to.

But one reason I thought it would be so much fun to do the children's books is that they are expected to be around 5 to 10,000 words.  I can crank out 1000 words or more in an hour.  True, illustrations take about a day a piece depending on subject matter - and because of the change in lifestyle doing artwork for ebooks has become a big stumbling block.

And speaking of illustrations for childrens books - while the simple physical effort involved right now in setting up my desktop, setting up the drawing tablet, and then taking both down and putting them away at the end of every work session every day is a considerable stumbling block - there is another one.  Amazon is trying to make the Kindle books accessible across all devices - a laudable goal.  However, they have not provided any sort of guidelines for someone attempting to create illustrations for those books as far as dpi or size (by pixels or inches).  No matter what size or dpi you use, on many devices your illustrations will look like crap.

My artwork on The Fox and the Rabbit - done by guess and by gosh long before Amazon began pushing for illustrated kids books - looks like crap.

Not the real digital arts - but the display on a Kindle - yeah.  Awful.

So that is one, very frustrating, issue.

But even with that driving me further insane than usual, why is it not one single children's book got put out all year long?  I had time to write and to draw - and I did so.  I finished a Nano novel.  But not one single children's book.  You know, the ones I ought to be able to crank out one a day, or at least a month.  Heaven knows, there are other authors who do - and their work is perfectly acceptable.

So what is the deal?  Why am I procrastinating myself into paralyzation?  There has to be a deeper, stronger, underlying reason.  And after a good deal of thought, I think I have figured it out.

I'm afraid of offending - and afraid of being sued or punished in some way for it.  Parents now are so terribly sensitive about what their children see or read or are told - and of course they are well within their rights to be so.  I am Pagan, and I also believe in science as well as mysticism.  There are plenty of parents out there who would disagree with what I tell kids in my books.  I think kids are pretty tough and pretty smart, and I think they can deal with the idea in the Blue Dragonfly series that not all parents are perfect, or even really wanted to be parents.  But how many parents want their kids to know that?  I am also totally open about the fact that I write p0rn under a pen name.  Some parents would find that so horrible, even though believe me there is no sex in the children's books.  Really.  PUHleeze.  (I would like to point out that if you have kids - you must have had sex so don't get all holier than thou on me)

Silly as those reasons may seem to you - they are what is holding me back.  I'm afraid.  Afraid of something vicious and retaliatory, from nasty reviews to lawsuits.

So, after some more thought, I've decided that Goddess knows I do not need any additional stresses in my life.  I am bipolar with PTSD and I am perfectly capable of obsessing over an imaginary maybe it could happen episode until I have  given myself serious physical symptoms.  (That's another thing - someone might decide I shouldn't be writing for kids because I am mentally ill).  And, of course, there is the procrastination.

If the three little books I have out had taken off and made me a millionaire in a week or two, that might make a difference.  But given that combined they earned me less than ten bucks last YEAR, the personal costs outweigh the potential profits by a considerable margin.

I mean - in the time I spent writing this blog post I could have made that much swabbing toilets or loading a truck (and have in the last month or so).

But there are so many other possibilities...