The December of Short Stories 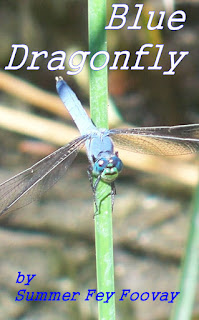 The other day I was updating profiles and this and that on social sites and Amazon and so forth, when I noticed that my children's book, Blue Dragonfly has three - count them - three five star reviews out of three reviews!

In case you don't get why that is a big deal - I do not have the money to purchase five star reviews.  I don't have a publicist to sit and email Amazon reviewers and offer them a free copy to review.  One of these reviews is from a person I know on Facebook - I think - the other two I don't know from Adam.

Yeah, I thought it was a pretty big deal myself.  Rather revives my faith in writing books for children.  Blue Dragonfly is the first in a planned series for kids about ten years old, a little older or younger would be fine, too.  Number two in the series, The Weaver, has no reviews.  Awwwww.  The next few books to follow will be out early next year if not sooner.

The Blue Dragonfly series is a melding of natural history and magic.  And who doesn't love a shape shifter?  Or is he just a crazy old man?  Either way, he sure knows a lot about animals, and people, and things you wouldn't think he should know.  But what can you expect from someone who tells you the first time you meet, "I was a blue dragonfly once.  Once, I was a blue dragonfly."

The Blue Dragonfly books are only 99 cents - or free, of course, on Kindle Unlimited.  If you get a chance, maybe you can give them a look - and a review.  Read them to a kid over the holidays...

Oh yeah - I almost forgot to tell you why it is the December of Short Stories.  Because, having proven once again to myself that I can easily crank out upwards of 2,000 words per day I plan to spend this month adding short stories to various series I already have going (including the Blue Dragonfly group), zipping out short stories for various websites who publish such, submitting some shorts to Amazon Shorts, and finishing and publishing some works in progress.

Here's a little teaser for the one I worked on today - working title "KIDNAPPED BY CENTAURS!"

“You walk like you were crossing a field to water the horses” Robin hissed at her, under her breath, “Slow down, give that cute little butt of yours a bit of swing.”  Winking, Robin raised her voice to be heard a little better.  “This is my little sister, Fala – isn’t she cute?”  The wealthy merchant looked Fala over from head to toe and shrugged, giving Robin a squeeze with the arm draped over her shoulder.  “I think I like you a lot better” he smirked.
“Oh, give her some time to ripen up” Robin teased, “She’s young yet, but she is learning.  I’ll thank you for one of those flutes of the champaigne, Fala, and a couple of those little finger sandwiches.  Are there any of those with the cheese?  You know I love those!”  Robin subtly moved her eyes to cue Fala which items to hand her from the heavy tray and for once, Fala managed it without losing the balance and chucking food all over the place.