Newflash for HSBC bank - New Mexico is not in Mexico 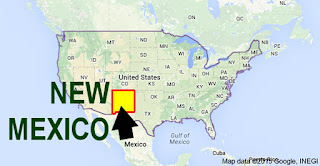 Every single time I have moved since I had my HSBC account we go through this same rigamarole.  I call to change my address.  They contact me to inform me they cannot verify my new address in MEXICO.  No doubt, this is because I don't live in Mexico, I live in the state of New Mexico in the United States of America. Which, due to experience, I specifically attempt to make clear to them the first time.

It generally takes four or five emails and then a half dozen or so phone calls taking upwards of 20 minutes each before I speak to someone who is in India (I think, judging from the almost incomprehensible accents), including speaking to a supervisor who will also snottily inform me that I am mistaken, I live in Mexico - and my closest local branch is in Mexico City.

By the way, no matter how very politely you tell them you cannot understand them and ask for another operator, they will hang up on you.  And I have had many who are completely incomprehensible.  Oh yeah -they'll also hang up on you if you start speaking Japanese.  I couldn't resist.

And their new secure email is really fun.  I had to open three tabs, prove who I was three times, make up a new password, verify my email, to get a message to call them.  No, I'm serious.  It's true.  They said they couldn't call my phone either - I'm going to guess because my phone number probably doesn't work if you put the country code in for Mexico first.  Since I am in the United States (and so is my cellphone).

I just checked, and Mexico does not even have a state named New Mexico.

The United States of America, however, does have a state called New Mexico.

But I guess the main office in Buffalo, New York isn't aware of that.  Nor is the call center in...wherever it is.
I spell every word in the address, usually twice.  I emphasize (now that I know they are idiots) that I live in the United States.  And still - here we go again - "Well, ma'm, I see you live in Mexico"...

New Mexico needs to switch their publicity from "Land of Enchantment" to "yes we are part of the United States - really".


They made the mistake of calling me back for a "customer satisfaction survey" and I used the last two minutes on my phone (which I keep only so my disabled husband can contact me in an emergency - now he cannot) to suggest they hang a map of the United States on the wall in...wherever.