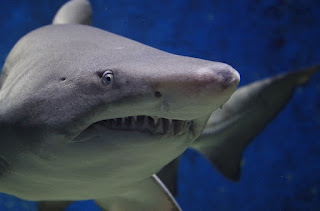 According to Amazon Game Circle stats I am in the top 1% of Hungry Shark Evolution players.  My last highest score was over 11 million points with the Megalodon.  I plateaued a bit earlier this year and was looking around online for game tutorials or help and discovered that there are quite a few on YouTube, all created by and meant for players on levels I had long since passed.

So this is my little help guide for more advanced players of Hungry Shark Evolution.

Some of it will apply to players at any level, I suppose.  You can get the game free for your Android device from either Google Play or through Amazon.  The game is free, but of course you can make in-game purchases.  In the two or three years I've been playing (I switched tablets and had to start over) I've never spent a dime.  (Probably shouldn't be saying that, but it's true).  If you search on Amazon there is a lot of fun merchandise like T-shirts, too.

So if you have made it to the Megalodon - be sure and do all of the missions - especially the 13 sunken objects - as soon as you can, while he is still (relatively) small!

Mission Hint - Focus!  Concentrate on doing one mission at a time.  For many of them, such as the Boat Breaker, Crowd Surfer, and Harpoon Boat Bite you will have to cross the playing field more than once.  Go across once grabbing all the boats/bystanders/harpoonists that you can.  Then dive down and hide out in the tunnels (grab a few sunken objects while you are at it) and go back to the end you started on, doing your best to avoid the subs and divers.  By the time you get there, the surface will have repopulated and you can go across again.

If you are working on mission on the surface - like Boat Breaker for instance, do NOT jump for the stars up in the sky.  Attracting the attention of the biplane, helicopters, jet or robot shark will spell the end of your surface time as you will quickly be killed by those flyers!

Best purchase I ever made:  The lava baby.  I love that kid!  He deflects damage from bombs, making your sharks impervious to all but the ultra mines.  He makes zipping through the lava tubes with their flame thowers a breeze. IMHO this is the A#1 best baby to have for any shark up to and including Megalodon.

Other good purchases will probably vary depending on your playing style and what you like but I love my Laser and the Shark Vortex.  A neat advantage to the laser is if your shark is getting hungry and don't see fish nearby - it will point them out by shooting at whatever is closest and you can follow it!  The Vortex comes with a warning label - no?  Well, it should.  It will drag enemies and mines and everything else at you - so be aware of that.  The skateboard is handy if you are into snarfing up innocent bystanders on shore, but nor really a necessity.

A little trick for all levels for those pesky submarines.  They always want to point right at your shark and shoot.  The trick for killing them - which works even better since the last update gave us a little larger field of vision - is to come up from underneath them and bash into the area close to their nose to knock them out before they can get their torpedoes pointed at you.

That's all I can thank of right now.  Thanks FGOL for the great game!  If you are having a problem or have a question, you can post it in comments and I'll answer it as best I can.