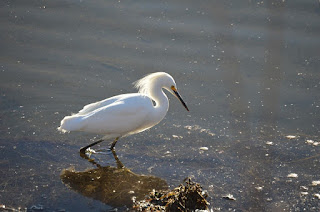 The powers that be released the Rio Grande through Truth or Consequences, NM for Memorial Day.  Wonder of wonders, it is still running (they opened it once this spring, and closed it two days later) so now us locals can enjoy it in relative peace!

We went about halfway down Riverside Drive to a pull out we know and I tossed my little yellow kayak, named Dandelion, into the water for only the second time this year.  This far into town you don't have to jump any of the breakwaters to float on down.  I was being cautious until I found out how much water was in the river, what the flow was like, if the channel was clear, and just how much muscle and fitness I lost over the winter.

There is so much water in the river it simply rolled over the one little obstacle (which is actually a huge downed tree that has been gathering debris for a year now) that was in my way.  The flow is perfect.  I had to scull enough to keep the nose pointed forward, and paddled around a couple trees and to get myself pointed into the pick-up spot and that was it.  Lazy!  Easy Peasy!

On the way down I was treated to a smorgasboard of "the usual suspects" as far as birding went.  First was a family of red-tailed hawks.  They were circling so high I couldn't see that red, but I heard their distinctive "keeeeeer" call.  Did you know that is such a distinctive and clearly bird of prey call, that most of the time when you hear an "eagle" in the movies or on TV it is actually the red-tailed hawks cry?

Next up was a pair of vultures perched high in a dead tree.  One had his back to me, wings spread, gathering up some morning sunshine.  The other faced me, and was so big that for a few minutes I wondered if that California Condor that was spotted near Alamagordo had made his way down here.  Nah, just a really BIG Turkey Vulture.

A riverside willow chattered with the voices of a million invisible little birds - mostly barn swallows, house finches, and various sparrows from the sound of them.  I saw some cliff swallows over the river a few days ago, but they must have moved on as I did not see any today.

I floated past the overhanging tree where I've seen a little herd of deer, a grey fox, and once a coyote having a drink and thought about the memories I have of kayaking this river - so different from those I have of kayaking the Arkansas River in Tulsa, but every bit as cherished.  (Let me just plug One Woman + One Kayak = Bliss - which is currently free on Amazon if you click here!)  No doubt I'll be on the Rio Grande again, and even this area of it (which features in all the Locoweed books to come) but soon it will no longer be right outside my door.  I'll miss it, when I'm not too busy having fun exploring new places!

I wasn't the only one enjoying the warm morning with it's cool breeze.  A couple of women lounging on their deck by the river waved.  There weren't any kids at the skate park, but one zoomed by with a wave up on the street - his dog was pulling him along while he rode the skateboard!  I've always thought that was very trusting - my greyhounds would have been great at that - if you didn't mind detours to chase squirrels and bunny rabbits!  A group of three older folk were doing tai chi on a back deck and seamlessly worked in a wave for the kayaker - all together in rhythm as if they had planned it!  A lovely dark haired lady contemplating the little waterfall at one of the hot springs places, looked up and smiled.  And at the take out point someone working for Whitewater Rafting was kind enough to pull me right out - even though I wasn't one of the customers they were waiting for.

Weather and time permitting, I hope to be out there every day this week - my last few sort of semi-lazy days.  Six days to lift-off for the Firefly!  Now I need to get up and go do my chores!

*The snow egret pic is from Pixabay; http://pixabay.com/en/snowy-egret-bird-wading-water-621951/ *  Don't have my waterproof camera YET

We started a countdown a few days ago - counting down the days before we disconnect the Firefly from her umbilicals here in T or C and get out on the road!  Wheee!  I have an off and on case of the butterflies in the stomach.  I know we're going to have so much fun, but of course, there is so much to be done and always little things that will prove to be speed bumps.

I know that I'll be gaining so much material for kayaking and birding and camping books.  I'll finish a few that are laying around, and have lots to write for new ones.  Several ideas are rattling around in my head (aren't they always) and I haven't chosen one (or more) to fulfill yet - but meanwhile I've put the old One Woman + One Kayak = Bliss

on sale for FREE on Kindle for a few days.

Today is Tuesday, so I'll be doing the White Tornado on the house - which takes maybe an hour now LOL!  I really love our little place.  The rest of the day will be devoted to writing on book three of Blue Dragonfly which is shaping up nicely, and probably reading one of the two books I have for review. It looks like it will be a nice day so maybe I will get outside for a chalk drawing later and at any rate, I'll see about a horse for Foovay's 365 Horses.

I am thinking I won't be accepting any more books for review for a month or two until I see how my time works out on the road.  I try not to take on any obligations I cannot fulfill in a timely manner.  The same is true for Kindle book covers - no new ones for anyone else right now.

AT long last here are the promised photos of the Firefly on the inside.  She is so much nicer than the poor old Pixie Wagon (who is now safely in her new home with a new Dad who is looking forward to tearing her down to nothing and rebuilding).  This is the day after dialisate delivery (a months supply), so it's a full load on board.  As stuffed as she will ever be. 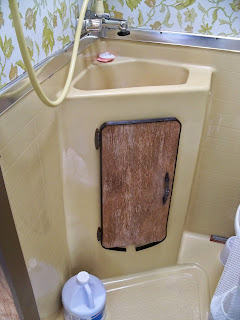 I have to say I find this little bathroom with sink,shower, and toilet combined in a single all plastic stall dead clever.  So easy to keep super clean (as ours has to be with ESRD and peritoneal dialysis).  Yes, I brought my beloved Demodetic toilet with me - you can see her peeking around the shower curtain there. 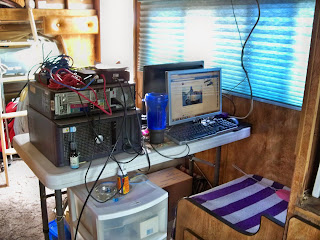 Hubbys little computer corner.  In time both big ol' desktops will be replaced with laptops or 2-in-1 tablets and the table with a smaller one.  Real cushions bought for the benches.  And then we'll have even more room.  ATM I've got a box of dialysate under my feet - LOL. 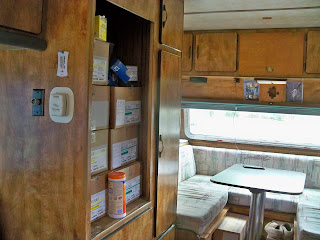 Left side looking back.  Yes, dialisate piled in the refrigerator nook for now.  We need a new fridge and then we'll have to find another nifty nook to store these boxes.  But again - right now we have a full months supply. As the month goes on more and more of these boxes will be emptied and disposed of. 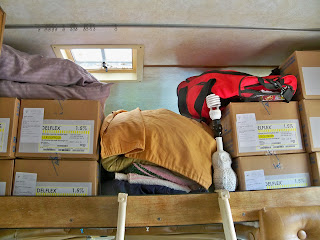 Overhead.  This is the back half which has dialisate and the bedding right now.  Normally the bedding is in the cubby under the couch - but dialisate is there right now.  The front half has my little secondary bed and all three big plush alligators so there is plenty of room up there if we need more storage.  I'm a little leery of putting too much dialysis fluid up there as it is liquid and pretty heavy. 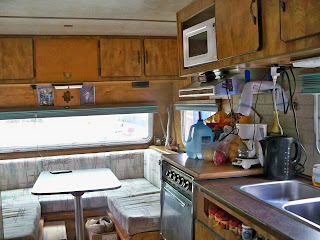 Kitchen and right side looking back.  Ain't it cute?  The table and couch in the back turn into a decent sized bed at night.  Meanwhile, we have an actual table to sit, eat, play games, work jigsaw puzzles, or watch birds out the window.  Some of the stuff on the counter will be replaced with more space saving items in time. 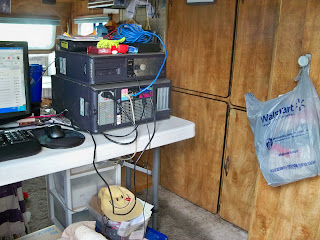 Wifies computer corner.  To the right the door with the plastic bags is the bathroom door. Look at all those cabinets!

So if you've been wondering what I've been doing the last few weeks... I've been working on this motor home, then moving in, then getting the Pixie Wagon to her new home.  Hubby has a full list of little honey-dos that he's been doing for six weeks or so to get this accomplished.  Had a few myself.  Still more to do but we are at least in the new place and relaxing a little.  Next month we'll be on the road!

I've gotten a lot of the little jobs I was doing for various people taken care of.  Down to one book cover to draw and a couple of books to read and review on Amazon.  The river is finally running and may call me away to get the kayak wet a few times before we go.  I am hoping to get going on 365 Horses again, as well as back to writing.  The time away has been good though - I've come up with a notion to connect all of the various disparate Locoweed YA books together in a fairly coherent fashion with a unifying theme and conceit.  (It involves a prehistoric crocodile if you must know) Amazon has gotten back to me and I can pull Bloodline down for a massive rewrite (moan - not again) and then it will go back up with a new pen name, title, cover, and dump those old reviews in the process.  I changed my author page at Amazon a bit - you like?  And I still have adult coloring books and the Blue Dragonfly series for younger kids on the back burner, along with some more Petit Morte - sex stories on down the line.  Strange as it may seem, I believe that traveling is going to end up giving me more time to work on creative projects.  I always get all full of ideas when I'm on the road.  And of course, much art and photos (including some from the hubby who has a terrific eye for photo taking).