This week I was informed that one of my kindle books was removed from sale because it "violated Amazons terms" by its title, cover, and description.

Now while it is true that I write erotica - so do a lot of other people.  This particular book, Tickling Cousins, I consider one of my gentlest, sweetest, kindest and probably most innocuous little books of all.  After all, 10% of all marriages in the world are between cousins.  Only the U.S. bans marriage between cousins in the Western world according to Wikipedia and that only in 30 states (meaning in 20 states it's okay to marry your cousin).  So if it is okay to marry your cousin, I assume it is okay to have sex with them.

And tickling?  Really?  Tickling is too offensive for Amazon - the company that allows the publication of rape fantasy, beastiality, and father/daughter incest finds tickling offensive?

I have contacted them several times, and they will only say the title, cover, and description are offensive according to their terms - and these are their terms here - vague much?.

So what the hell.  Here, in it's entirety is the little short sex story that Amazon deems far too nasty, filthy, and offensive for their sensitive readers of father/daughter incest, bisexuality, and beastiality. 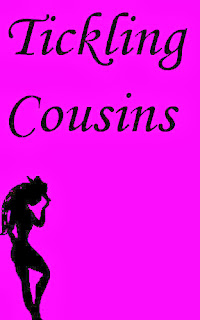 It almost seems too trite, but it’s true.  Yes, they were from the Southern United States, and they did, indeed meet at the family reunion.  Now, mind you, they aren’t related, at least not close enough for it to matter between related by marriage, cousins third, fourth, fifth, who can keep track.

They were at that sort of awkward age where they weren’t sure if they should sit at the children’s table or with the adults.  Over 18 but under 21, complimented and a bit scared if the adults offered them a beer over by the barbeque.

She loved kids and always somehow wound up unofficially babysitting all the younger cousins at the family reunion, organizing them for baseball or tag or hide and go seek around the old barns and outbuildings (of course, it was at the old family farm), and he was showing some of the younger boys how to cut a young cane for a fishing pole.

Somehow he and the boys got sucked into the big game of tag.

And then somehow he wound up chasing her round and round and into a quiet spot around behind the tool shed where he caught her at last.

He caught her by the hand and drew her in and still full of youth and the spirit of the game he reached out and tickled her.  She laughed and tossed her head and wiggled away.

He grinned, loving the way her red hair shone in the sun when she tossed her head, and the way her tight butt looked in those jeans when she turned to run so he caught her again and tickled her some more.  She wiggled and giggled and between running and laughing her pert, full, young breasts heaved under that t-shirt and it occurred to him she wasn’t wearing a bra.  His heart skipped a beat.

Caught halfway between playfulness and lust he pulled her close and tickled her some more and she laughed and tried to tickle him back, pleased and impressed at his tight slender waist and hard, young body, she entertained a momentary wish to see if that tummy was as flat and hard as she thought it was.

Flirting he explored every spot he thought she might be ticklish, and grinned evilly when she poked and tickled and couldn’t find a single spot that made him giggle and wiggle like her.

“I’m only ticklish in one place”, he confided, with a flirtatious grin.

“Oh, and where would that be?” she managed to gasp out as he tormented her to the point that she lost her balance.

Suddenly they were lying side by side in a pile of hay, having somehow worked their way inside the old tool shed.  A good thing as her t-shirt had worked its way up until he could actually see the satiny white mounds of her tits with their hard little nipples.

She gave a little scream and made a not very hard effort to pull her shirt down, which she abandoned because she couldn’t keep struggling while he tickled her ribs with his fingers and kissed and licked those nipples at the same time.

By then he was laying on top of her and she had a very good idea that that one ticklish spot might be that very hard, hot lump that was pressing against her thigh, or at least somewhere very near it.

He was nibbling her neck, just lightly enough that she would have been thrashing and kicking but for his weight holding her down.  As it was she was reduced to panting and giggling and squealing.

Hoping for a little revenge, or maybe a little something else she flattened her fingers and slid her hand right down the front of his pants and found a bit of flesh just below that flat, hard young abdomen where muscular thigh met pubic mound, where she managed to curl up a couple fingers just enough to…tickle.

He jumped a foot, screamed, and suddenly rolled aside to curl his whole body around the offending hand.  Kicking his feet in the hay he tried to get his hand down his pants to get hold of hers and pull it out but it was hopeless.  As long as she was tickling him he was never going to get it done.

In partial desperation he unzipped his pants.  He caught her hand, but set loose a serpent.  One hard flag waving dick pounding with impatience to get some attention of its own.

She gasped and sat up, one hand over her mouth, blushing prettily, as red heads do, from her exposed breasts right to the roots of her hair.

There was a little pause.  She reached out with one finger and touched it.

It moved.  A little drop of precum rose to the tip and she thoughtfully spread it around the head of his dick with a soft fingertip.  His eyes closed, he moaned softly and arched his hips towards her.  She giggled.

Petit Morte is a former sex worker now writing erotica and sex how to books for the Kindle.  If you’ve joined and read sex stories or articles at a pay site, you may well have read many of her stories under other pen names.

Yes, Petit Morte is a pen name, and you can find the rest of her work  here

If you think you can stomach such filthy offensive matter!
at October 15, 2013 No comments: