Who created trees, forests, birds, mountains, and all the wonders of the world we live in?  We call that entity God, Goddess, the Higher Power or the Higher Spirit and we worship them, respect them, and beg their indulgences for ourselves and those we love.  Most of us try to work with them by living a conscious life.

But each of us is also a creator.  It is that ability within all of us to create that links us to that Higher Power.  It is the proof that we have a spark of that God within us – that we are part of the creation and ourselves creators.

Many people do not believe they are linked to the Higher Power, or that it could possibly be part of them.  They don’t give themselves credit for having the power of creation.  Some people are unable, or unwilling, to see that they are creators in their own small way.

Here and now, the prevailing belief system labels only certain people as creative.  Musicians, artists, writers, actors and actresses.  And how we revere many of those people as if they, too, were gods and goddesses in their own right!  Of course, they are – but so are you.

Each and every one of us is a creator.

You took the building blocks of a life, and you created one.  Perhaps you created positively, bringing light and life into the world, sharing love with all those around you.  Perhaps you looked at the building blocks you were given, compared them to those of others and got angry, jealous, envious, and tried to destroy your own life and joy and that around you.  There’s a place for you in this Universe, too. If there were no darkness, the stars would not twinkle so brightly.

Many people think they are not creators at all.  They take the building blocks they are given and let them lie in piles around them, wherever they may fall.

Have you ever seen a small child like that?  You can hand them toys, toss them to them and they let them lay where they land, staring dully at them or walking away.  I think maybe they are still trying to live in a different world, the world we all came from to begin with, where we are all Gods and Goddesses and we know it.  It’s a bit of a come down to find ourselves born into this mundane world where magic sometimes works so slowly.

There is no use denying this world.  It isn’t perfect, but we are not here by accident.  We are here to create, and even if we pretend we do not know that and walk away – then we have created a void where we could have been.  And doesn’t that suck in an entire army of creators?  Nurses, doctors, psychiatrists, behaviorists, the parents of such a child come to revolve around that void as light circles a black hole before it is sucked inside.  Sometimes it wakes up that little spark of Higher Power in the child, and they turn around and engage this world in whatever way seems best to them – even if it isn’t quite the same way that the majority of us do.

Some people think it’s better to hop off the cliff with the group, than to risk stopping and being left alone on top of the mountain.

We all create a life, whether we chose to or not.  By either choosing our building blocks carefully or haphazardly taking whatever falls close to us.  By either fitting those blocks into something beautiful, like a family or a company or a network of friends, or neglecting them except for when we sit down on one and the sharp edge hurts us.

Sometimes the blocks we are given are not what we wanted.  We can turn those over, turn them around, and look them over for at least one good side. There must be a star, or why create the night to let it shine? Or – although some people hate to do this – we can set those blocks aside and go looking for some that please us more.  There really isn’t anything wrong with that.

This is what I believe.

It's a whole new world

I have the wonderful luck to be friends with an amazing dog.  His name is Harry and he is sweet, and funny, and cute - and to him it is a whole new world every single day. 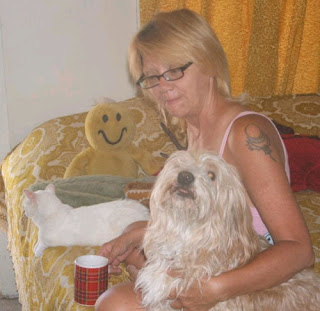 Today and every day for the next few days, I am with Harry - it's a new world.  I've made some decisions to make some changes.  Being the Cancer that I am, I've actually been sitting and contemplating them for months - but now decisions are made and changes are being implemented.  Hop on in to my grand adventure - the waters fine.  Nice and warm and healing with good minerals from the hot springs here.

One change you are sure to notice, is that I will now be keeping this blog as my personal and professional blog.

You will be seeing occasional updates about what I am working on, and when I'm working on something that isn't ready to share, or somehow busy I intend to inflict upon you oodles of my short fiction from a life time of writing.

The short stories and articles will run the gamut from opinion pieces (rants), non-fiction, and lots (mostly) fiction from erotica to children's stories.  Maybe if you like some of that, you'll consider purchasing my books.

Now that Flickr has made some changes and we've made peace (actually, I'm really happy with them now!) you'll be seeing photos from the hubby and I of the gorgeous New Mexico life.

Right at this moment I am doing more reading, writing and facilitatin' (more on that later) but I'll share new artwork, too.  I am less than thrilled with some of Zazzle's changes, but I have yet to find any place I like better for sharing my art on products so there ya go.  Wherever you go, there you are.

Facilitating is what I've decided to call that vague service I occasionally provide to other indie authors like me.  It varies a lot depending on the author.  Some folks contact me only for cover art, others need me for editing, rewriting, cover art, formatting for Kindle and publishing their book.  I've had the opportunity to work with some amazing and wonderful people, and I will be introducing you to them and their work in this blog, too.  Maybe I'm weird, but I have as much fun helping someone else achieve their dreams as I do achieving my own.  Mind you - I charge for it - but I charge less and provide more than those "publish your book" services do.