Don't Hate Me For Being Happy

To whoever posted that nasty and personally insulting review of Bloodline - thank you.  I didn't really want to go on with that series and since I'll obviously never sell another copy after that review I can quit now!

For the last week I've been haragued, insulted, and told to go suck a dick on Facebook, and now this review.  Seems my happiness and love brings out the viciousness in certain people.  I don't know what you think you are accomplishing.  Am I supposed to go kill myself?

I was raised by a child molester and a psychopath.  My first husband was another psychopath.  I've been through horrors you can not imagine.  I've had three very evil people do their best to break me.  And I'm still here, motherfuckers.  Living good.  Loving life.

I'm sorry your life is so horrible you can only troll the Internet and try to ruin others.  Many blessings to you and I hope you find a shining light path someday.  Blessedbe.
at June 29, 2012 No comments:

My Books Free On Kindle 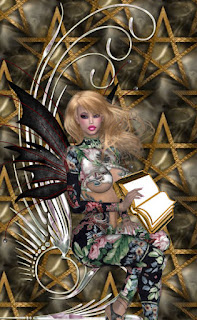 Fans of the old Lord of the Rings series, who may have even read The Hobbit before the movie, know that hobbits have an interesting birthday custom. Rather than giving gifts to the birthday girl (or boy) the birthday boy (or girl) gives things away to their friends. Finances permitting, I've followed this custom for years. Not that I turn away a gift either ;)

My birthday is June 25th and I will be a ripe old 53, something a lot of people never thought could possibly happen. I'm also writing, illustrating and publishing books - something else a lot of people said would never happen. I think I might edit and finish an old manuscript and publish a new book on my birthday just because I can.

Meanwhile, here is my birthday gift to you - all four of my current publications on Kindle free for five days, beginning June 23rd.

Cutting Away The Pain

thriller, serial killer(s), did I mention intense? Give me a reason to go on with this series - right now I think it is far more work than it's worth. OR show me that it really isn't worth it.

Tales From The Webitchtress Mansion

Free Book On Kindle This Weekend!

Vol.1 is free this weekend!

will be free for the Amazon Kindle starting Saturday through Monday. Bridge bidding can be incredibly complex and frustrating for beginning bridge players. Jackie hopes to share her experience as a silver life master with ACBL and teaching bridge through a series of bridge bidding books on Kindle. I'm trying to help! LOL. If you follow this blog at all, you'll know I've had to edit and re-edit this book since I do not understand bridge at all! At last, it is ready to go - get your copy this weekend!
at June 15, 2012 No comments:

Litha greeting cards - three new designs for 2012 for all your pagan friends and family who celebrate the Summer Solstice season. I hope you like the new style this year - it's a little different from what I've been doing. Pentagrams, stylized sun designs, and fairies decorate these new Litha cards and there is one just for friends who relax and enjoy their summer solstice together.

Summer Solstice with Friends by foovay
View other Friends Cards
at June 12, 2012 No comments:

is a book of beginning bridge cheat sheets on Kindle that you can easily refer to with your Kindle using the active table of contents, or print out to keep at hand when you are playing bridge. I introduced you a few blog entries ago to Jacqueline Wilson, silver life master of ACBL and budding author. This is the first of several planned books for beginning bridge players to be published for Amazon Kindle. I think the idea of bridge cheat sheets for Kindle is great - never mind half a dozen rustling bits of paper, just set your Kindle by your side and play bridge! Please check out this bridge cheat sheet book and let us know what you think - Jackie has plans to write quite a few more! And yes - that's my cover :D

I’ll Have Another Gets The Chance

I’ll Have Another Gets The Chance Kudos to the owner of I'll Have Another for scratching the horse's entry in the Belmont Stakes.  Read the article for some commentary on horse racing - from someone who has worked in the animal industry.
at June 08, 2012 No comments: